Rick Duerden, in particular, is going to be one of my favorite this semester, I can already tell. He's passionate and funny, and just what I need in my life right now. See, I sometimes have this awful habit of second-guessing myself. So right around the beginning of the semester every year I have a mini-panic attack because I'm worried that maybe studying English and German isn't going to be a sound enough choice. That maybe I ought to suck it up and swallow back my distaste for Chemistry or Biology or whatever and start getting a more specific education.

And then people like Rick come along, and explain that in studying English, we don't have to be good little fascists. We can think for ourselves! No no no, I can think for myself! An' that's the truth, isn't it? Because by thinking independently, perhaps we really can, as Rick put it (in his best imitation of the Brain), "TRY TO TAKE OVER THE WORLD!"

Some of my other classes terrify me a little bit; they're going to challenge me. But I love that. I love trying to break out of my little self-contained world and talking to other people.

And despite the fact that I'm going to have to kiss my social life goodbye, this semester seems like it's going to be a good one. I almost got to move into a house, which made me really really happy (because I love old houses very very much), but it didn't quite work out. But I'm happy with that, too, because I have two of the best roommates anyone could ask for. So if this is where I'm meant to be (and there's nowhere you can be that isn't where you're meant to be), then I'm just pleased as punch to see what lies in store.
Posted by Tana at 7:03 AM 1 comment: 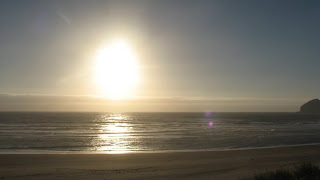 Oh how the sea,
To you and me
sings a longing ecstasy.

Hey friends. I know it's been a while since we last talked. I didn't mean to neglect you . . . It'll never happen again. Or, it probably will, but it doesn't mean I love you any less.

Wow, a lot has happened since I posted last. After McCartney (and the confirmation that perhaps we really might be able to give peace a chance), I fled.

I don't know what from; maybe everything, or maybe nothing. All I know is that I jumped into Artie, and sped off after a dream. Following were a night of satisfaction, a day of joy, a night of terror, a day of bliss, a night of despair, a day of anxiety, and a night of relief.

My birthday was gear. We saw Inception at a drive-in, which brought back a childhood euphoria that I haven't felt in YEARS. It was a funny way to kick off my entrance into (what I feel to be) the real realm of adulthood. My doll of a coworker called these my "salad years." When I inquired as to what he meant, he simply replied, "You know, fresh!"

I'm dismayed by how little I read this summer, but I've seen more movies than you can shake a stick at. I've become a zombie-movie connoisseur, a die-hard Woody Allen fan, and a sucker for indie films. Micmacs, Into the Wild, and 28 Days Later are probably some of the most beautiful movies ever made.