Seriously, I'd marry the guy on the spot.

Could a Loyd Dobler really exist?
Posted by Tana at 8:36 PM No comments:

Cowboys and Indies was the best. Well, maybe not the best, but pretty dang close. I challenge you to go to an ER show and try not to dance. Just try it. Seve vs. Evan was epic, too. Moses was a lot more mellow, so I wasn't quite as drawn in, but the other Cowboy band, Code Hero, was fantastic. Unfortunately, the crowd sucked. Droves of insolent, rude high school seniors talked over both Code Hero's and Moses' sets; I think part of the reason that ER and SvE stuck out was because they were loud enough to drown out the chatter. Also, apparently there's an ongoing joke betwixt the members of Seve vs. Evan, that involves the removal of shirts: 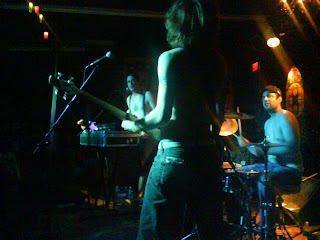 On another note, I am pee-my-pants excited for the Dec. 4 show. The Russel brothers, as mudbison and Isaac Russel, will be playing together, and I cannot wait. 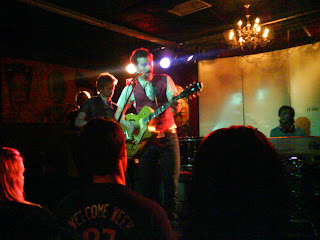 Come on Wednesday. You're almost here.
Posted by Tana at 3:44 PM 1 comment:

My goodness, where to begin?

I'm in love. With Walt Whitman. As if you couldn't already tell. I've got several poems taped up around my room.

Reading the heck out of Plato. I also know what I'm doing for my next Pen & Sword project (after this blasted exam is over): I'd like to take over Plato's style and create a "lost dialogue" of sorts, entitled "Justification." I have this idea that in Crito, Socrates is (without directly stating it) equating Law with Soul, and the governed body with the physical body. It's a multifaceted concept, and I think I could pull enough out to satisfy Griggs.

I desperately need to go to the Cinema. I haven't been in so long! After this crushing week is over, I think I shall. Pirate Radio looks good. Then, too, if Bright Star is still anywhere around, I might see that. Also, whenever it gets out, Fantastic Mr. Fox, because I'm actually still a fourth-grader at heart, and Roald Dahl is one of my favorite authors, and the animation style looks gorgeous!

I'm euphoric. The almighty internet told me that Good Earth Natural Foods stocks Tofurky! Hoorah! This Thanksgiving is going to be excellent.

Lastly, I am seriously looking for a nature-oriented job this summer. Somewhere in the mountains. A paid Hermitage would, I think, be most premium, but those aren't super common anymore. Alas and alack, I will search on.
Posted by Tana at 12:57 PM No comments:

Come my tan-faced children,
Follow well in order, get your weapons ready,
Have you your pistols? have you your sharp-edged axes?
Pioneers! O pioneers!

For we cannot tarry here,
We must march my darlings, we must bear the brunt of danger,
We the youthful sinewy races, all the rest on us depend,
Pioneers! O pioneers!

O you youths, Western youths,
So impatient, full of action, full of manly pride and friendship,
Plain I see you Western youths, see you tramping with the foremost,
Pioneers! O pioneers!

Have the elder races halted?
Do they droop and end their lesson, wearied over there beyond the seas?
We take up the task eternal, and the burden and the lesson,
Pioneers! O pioneers!

All the past we leave behind,
We debouch upon a newer mightier world, varied world,
Fresh and strong the world we seize, world of labor and the march,
Pioneers! O pioneers!

We detachments steady throwing,
Down the edges, through the passes, up the mountains steep,
Conquering, holding, daring, venturing as we go the unknown ways,
Pioneers! O pioneers!

We primeval forests felling,
We the rivers stemming, vexing we and piercing deep the mines within,
We the surface broad surveying, we the virgin soil upheaving,
Pioneers! O pioneers!

Colorado men are we,
From the peaks gigantic, from the great sierras and the high plateaus,
From the mine and from the gully, from the hunting trail we come,
Pioneers! O pioneers!

From Nebraska, from Arkansas,
Central inland race are we, from Missouri, with the continental
blood intervein'd,
All the hands of comrades clasping, all the Southern, all the Northern,
Pioneers! O pioneers!

O resistless restless race!
O beloved race in all! O my breast aches with tender love for all!
O I mourn and yet exult, I am rapt with love for all,
Pioneers! O pioneers!

See my children, resolute children,
By those swarms upon our rear we must never yield or falter,
Ages back in ghostly millions frowning there behind us urging,
Pioneers! O pioneers!

On and on the compact ranks,
With accessions ever waiting, with the places of the dead quickly fill'd,
Through the battle, through defeat, moving yet and never stopping,
Pioneers! O pioneers!

O to die advancing on!
Are there some of us to droop and die? has the hour come?
Then upon the march we fittest die, soon and sure the gap is fill'd.
Pioneers! O pioneers!

All the pulses of the world,
Falling in they beat for us, with the Western movement beat,
Holding single or together, steady moving to the front, all for us,
Pioneers! O pioneers!

Life's involv'd and varied pageants,
All the forms and shows, all the workmen at their work,
All the seamen and the landsmen, all the masters with their slaves,
Pioneers! O pioneers!

I too with my soul and body,
We, a curious trio, picking, wandering on our way,
Through these shores amid the shadows, with the apparitions pressing,
Pioneers! O pioneers!

Lo, the darting bowling orb!
Lo, the brother orbs around, all the clustering suns and planets,
All the dazzling days, all the mystic nights with dreams,
Pioneers! O pioneers!

These are of us, they are with us,
All for primal needed work, while the followers there in embryo wait behind,
We to-day's procession heading, we the route for travel clearing,
Pioneers! O pioneers!

O you daughters of the West!
O you young and elder daughters! O you mothers and you wives!
Never must you be divided, in our ranks you move united,
Pioneers! O pioneers!

Minstrels latent on the prairies!
(Shrouded bards of other lands, you may rest, you have done your work,)
Soon I hear you coming warbling, soon you rise and tramp amid us,
Pioneers! O pioneers!

Not for delectations sweet,
Not the cushion and the slipper, not the peaceful and the studious,
Not the riches safe and palling, not for us the tame enjoyment,
Pioneers! O pioneers!

Do the feasters gluttonous feast?
Do the corpulent sleepers sleep? have they lock'd and bolted doors?
Still be ours the diet hard, and the blanket on the ground,
Pioneers! O pioneers!

Has the night descended?
Was the road of late so toilsome? did we stop discouraged nodding
on our way?
Yet a passing hour I yield you in your tracks to pause oblivious,
Pioneers! O pioneers!

Till with sound of trumpet,
Far, far off the daybreak call--hark! how loud and clear I hear it wind,
Swift! to the head of the army!--swift! spring to your places,
Pioneers! O pioneers!